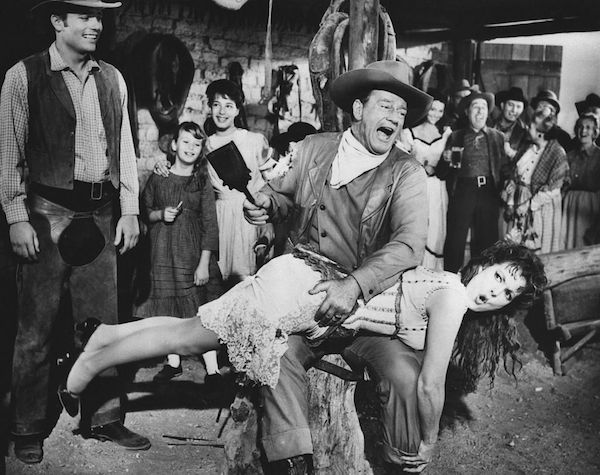 Windy’s Pick of the Week: McLintock!

Pairing up John Wayne and Maureen O’Hara (of The Silent Man) but this time in a comedy western! John and Maureen are older now, but the chemistry is still there. It’s easy to believe that they just moved their squabbling love affair from Ireland to the American West somewhere. From the IMDB: “Cattle baron George Washington McLintock fights his wife, his daughter, and political land-grabbers, finally ‘taming’ them all in this Western comedy with Taming of the Shrew overtones.” This is another entry in the category of “movies Mom made me watch” and the selling point is definitely the Mud Slide sequence.

Melissa’s Pick of the Week: Caged

I’ve name-dropped this film during a few episodes of Xanadu Cinema Pleasure Dome and I’ve written about it at length on my personal web site, but it’s great enough to suggest again. This 1950 film is a drama about life in a women’s prison. Not only does the film feature a nearly all-female cast, it was also written by a woman who spent time inside women’s prisons as a journalist. (She also wrote White Heat, one of the greatest gangster flicks ever.) The movie is very odd for its time, in that it does not shirk away from subjects that were often scrubbed from films by the Hays Code: out-of-wedlock pregnancies, prostitution, murder, and various critiques of the patriarchy. The characters spend their time behind bars smoking, fighting, plotting revenge, dreaming, and making deals, and you can tell the actresses are relishing every minute of it.