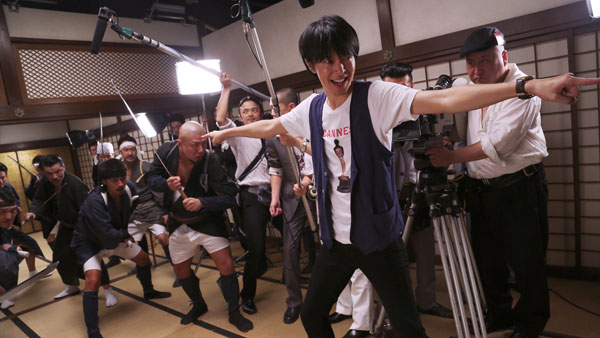 Melissa’s Pick of the Week: Why Don’t You Play in Hell?

I’m on the road this week, so I’m going to cheat and quote myself from a year ago:

“This is a movie seems to be what happens when Japan retrieves everything that Quentin Tarantino borrowed from Japanese cinema. The first 20 minutes of the film are directed like an ADHD hummingbird on speed, setting up dozens of strange characters in a dizzying shower of weird dialogue and dazzling visual cues. The core plot slowly emerges: a yakuza gang enlists movie nerd gang to help make a film in celebration of the gang boss’ wife’s emergence from prison. Why Don’t You Play in Hell? is fast, furious, bloody, joyful, entertaining, satirical, and really fucking funny. It moves at such a breakneck pace that you won’t want to blink, for fear you might miss something.”

Why Don’t You Play in Hell? has just been released on streaming and home video formats, so now, finally, you can see it, too!

We keep mentioning great movies that have been overlooked in our episodes, so let’s highlight one of those right here. Skeleton Key, starring Kate Hudson, is a lovely southern gothic tale, set in an old New Orleans mansion with secrets oozing around murky corners, and a grim matriarchal figure at the center of a lot of questions. Caroline (Hudson) has taken a job as a personal caregiver for an elderly brother and sister after the brother has some sort of stroke. But as Caroline develops a relationship with the brother, unsettling clues start coming to life, and a public lynching a generation ago might play a part. Surprisingly spooky, with lots of hidden undercurrents.