Episode 44: If You Can’t Feel Your Nose, Is It Still There? 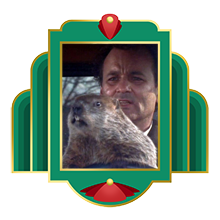 Oh wow, listeners. This week, we bring you the drunkest drunk we’ve ever drunked. Author and storyteller Rob Callahan returns to join us for an episode about philosophy movies, which is absolutely the sort of brainy episode you want to embark upon after killing three bottles of wine before even starting to record.

Seriously. We recorded for three hours. We edited out two hours of unintelligible mumblings and completely random rhapsodies about Jennifer Connelly in The Rocketeer. After the podcast, Rob fell asleep on the couch and woke up in the morning to find Windy’s daughter staring at him. Melissa mostly doesn’t remember recording the episode (yet apparently still had the faculties to describe Synecdoche, New York, no matter how many extra syllables she used).

It was after this episode that we decided that the SI Base Unit for inebriation is The Callahan.

It’s possible you will actually get contact drunk from this episode, but if you feel you need to enhance the experience, we suggest either Great Lakes Brewing Company’s Dortmunder Gold beer or Block Red Wine Shiraz. Because that’s what we drank after the three bottles of wine we started with.

Books mentioned:
Down and Out in the Magic Kingdom