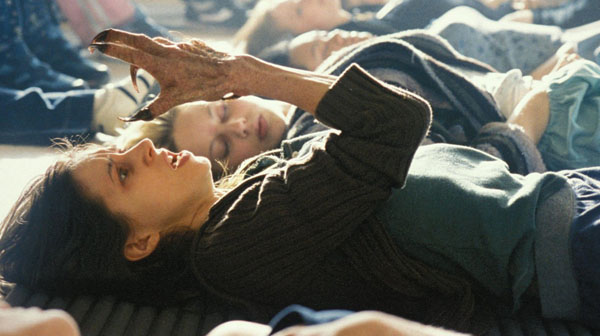 Have we recommended Ginger Snaps? Maybe we’ll do that next! But you don’t need to have seen Ginger Snaps to really get into this unexpected sequel. Brigitte is suffering from a unique curse – being a werewolf. Trying to self-medicate with monkshood while being a runaway leads to her being locked into a juvenile psychiatric ward – and that’s where things get REALLY interesting. The clock is ticking and she needs to either get her drugs or get out – neither of which seems likely. Will her new young friend Ghost help her? A very surprising and interesting take on the werewolf mythos, mixing in excellent commentary on mental health and women’s issues. The ending will leave your jaw hanging! (Sidenote: the young girl Ghost is played by Tatiana Maslany, who is absolutely destroying the lead role in ORPHAN BLACK)

Melissa’s Pick of the Week: Housebound

Housebound is a brand-new, delightful horror-comedy from New Zealand. It took Fantastic Fest by storm a few weeks ago, and it was in my top five of best films seen at the festival.

Housebound focuses on a young woman who is caught trying to steal a cash machine. Instead of sending her to jail, the judge decides instead to sentence her to house arrest at her mother’s eerie old country home… which does not delight either woman. However, after a few days, it becomes clear that the mother believes the house is haunted, and while the daughter does not agree about the paranormal, there are definitely things going on that neither can explain. What ensues from there is both creepy and hilarious; if you have fondness of the poppy horror-comedies of the 1980s, you will find a lot to love here.