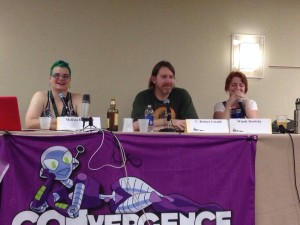 This week, we have a very special thing for our fine listeners: our first two-part episode! In Part 1, you will hear us with screenwriter, author, and film critic C. Robert Cargill, in a discussion we recorded in front of a real live studio audience at CONvergence 2014. In this episode, we tackle the issues surrounding writing good feminist media and tackle a very nice bottle of Yamazaki 12 year single-malt scotch.

We only had an hour to talk about a very big subject, which is why the three of us got together a couple days later to record for another hour. You’ll hear that part next week!

We apologize for the sound quality of this week’s episode, which contains a lot of ambient noise from the room.