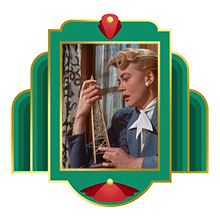 This week, dear listeners, we get down and dirty with the Birdchick (aka world-renowned birdwatcher and author Sharon Stiteler) for an episode all about film director Douglas Sirk! Now, don’t worry if you don’t know anything about Mr. Sirk’s films, because we do our very best to drunk-describe the awesome, plump melodramas that make up Mr. Sirk’s American ouvre.

Helping us on our journey was a lovely bottle of Lagavulin 16 scotch, which definitely gave us the right frame of mind to discuss 1950s melodramas.

And once again, we have to apologize for some sound issues. During the recording of this episode, we could have filled out a Audio Interference Bingo Card: a neighbor’s barking dog, police sirens, a small child, a chatty husband, an oscillating fan, a rainstorm, and a tornado siren. We were able to remove some of it from the episode, and and then work around the rest. Thus, the audio starts fine, and then slowly gets a bit burbly at the end.

Anyway, show notes behind the cut!

Other movies mentioned:
Far from Heaven
The Robe