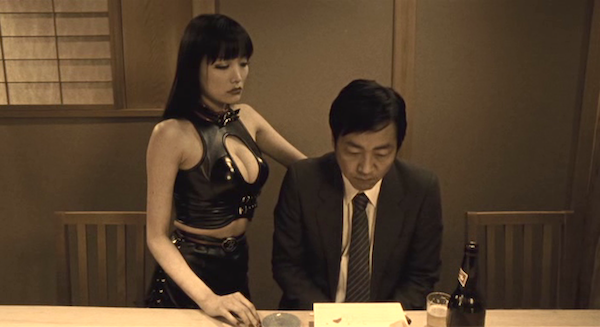 I don’t think I can describe this film adequately, but I’ll give it a shot. See, there’s this lonely Japanese businessman, and he finds he’s turned on by being humiliated by women. So he finds out about this secret bondage club, which basically has this subscription service where they randomly send out dominatrixes to humiliate their customers in unexpected ways. Well, our protagonist finds this great for a while, but then when he learns that he might want to unsubscribe, he finds himself stalked by a herd of really creative dominatrixes. Just when you think this film couldn’t get more bizarre, it does.

R100 contains a perfect scene, by the way. It involves sushi.

Drafthouse Films just brought this one out on disc and various streaming services, so, if you’re into relentlessly bizarre filmmaking, this one is for you.

Windy’s Pick of the Week: The Most Dangerous Game

With The Hunger Games series of movies coming to its conclusion, whet your appetite for the classic that (arguably) inspired it! The trope of men hunting men is well-established now, but Richard Connell’s 1924 short story is still being taught in classrooms because the power of the story still gets the blood pounding.

Joel McCrea stars as Bob Rainsford, the victim of a shipwreck. When he washes ashore on a nearby island, he is saved by Zaroff – who saves a lot of shipwreck survivors, it seems. Rainsford quickly learns exactly what entertainments Zaroff pursues on his lonely island, and soon he and Fay Wray are the prey in Zaroff’s sick game.

At only 63 minutes, it’s a shame to miss the story that started a sub-genre!