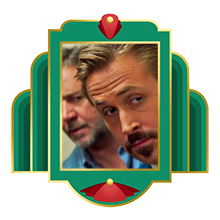 This week, dear listeners, we bring you an episode about Shane Black’s latest film, The Nice Guys! Even better, we recorded this with our Mississippi friends, Lisa Rucker and Jessica Griffis, right in the beautiful city of New Orleans!

If you would like to drink along, we recommend either a hand grenade or a shark attack, because all drinks should come with drink toys.

END_OF_DOCUMENT_TOKEN_TO_BE_REPLACED

Melissa’s Pick of the Week: I Declare War

Armed with nothing but sticks and their imagination, a gaggle of 12-year-olds immerse themselves in a game of Capture the Flag as a summer afternoon passes. It starts innocently enough, but soon the film starts showing how they see themselves in the game: carrying real guns instead of sticks, and throwing real grenades instead of paint-filled balloons. Soon, their game becomes as serious as the real thing, as they emerge from childhood innocence by learning what their friends are truly capable of. I Declare War basically takes all the horrors of actual war, and then uses kids to start asking the hard questions. It’s like Lord of the Flies meets Platoon, and it is thankfully blessed with some decent child actors. It’s a fresh take on the war movie genre and a truly impressive low-budget indie film.

Windy’s Pick of the Week: The Long Kiss Goodnight

Writer Shane Black kicked off his career with Lethal Weapon. Then he wrote fan favorite Monster Squad. After Last Boyscout and Last Action Hero, what did he write before he knocked it out of the park with Kiss Kiss Bang Bang and Iron Man 3? This movie.

Geena Davis is the woman who lost her memory 8 years ago. Samuel L. Jackson is the low-rent private investigator still poking around for clues about her past. That past comes looking for her at the same time that a minor car accident causes flashbacks to the person she doesn’t remember being. And that person…was a violent, dark, cynical thing. When her old self fully snaps back, you’ll see why Geena Davis won so many acting awards back in the day. In an unexpected and satisfying twist, Sam the Man is not the ass-kicking savior of the piece – that role belongs solely to Geena, who saves Sam, her daughter, and the United States all on the same night.