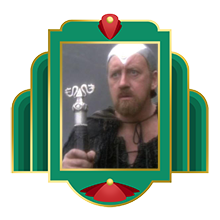 It is time, dear listeners, for our fifth Off Topic episode! Like our previous Off Topic episodes, this one is constructed of bits that were cut out of the previous 14 episodes: gaffs, giggles, tangents, and other random stuff.

And, as usual for these things, our subject matter and level of sobriety will vary wildly from clip to clip. So, buckle in and enjoy!

END_OF_DOCUMENT_TOKEN_TO_BE_REPLACED

This week, dear listeners, we talk to Linkara (aka Lewis Lovhaug) about making Atop the Fourth Wall: The Movie, a crowdfunded film based on his popular web video show. We discuss independent filmmaking, producing content for the Internet, and space ships.

For this episode, we were also joined by a couple of excellent audience members, Fes Works and Noel Thingvall. Yay!

If you want to drink along with Windy and Melissa, we suggest drinking whatever you have handy, because your dear hosts had drank so much wine prior to the episode that they totally forgot to mention what they drank. Thus, we apologize for all the lost consonants in this episode.

Show notes after the cut!