Tag: The Fast and the Furious

END_OF_DOCUMENT_TOKEN_TO_BE_REPLACED 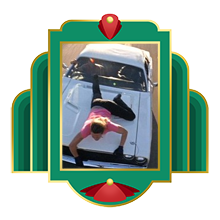 This week, dear listeners, we bring you an episode about Melissa’s obsession with car movies! We talk about car chases, car crashes, car explosions, and, of course, devil cults.

If you would like to drink along, you’ll need to go to a gas station in Wisconsin to pick up a bottle of Three Lakes Winery semi-sweet cranberry wine. But we won’t judge you if you substitute something within easier reach!