Episode 94: I Hate Outside 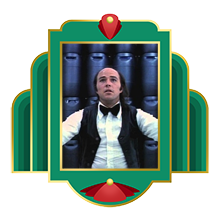 Oh, dear listeners, it is the time of year that be bring you the Butt-Numb-a-Thon Report! That’s right, we watched 24 hours of movies all in one luxurious glut, and we talk about all of them — vintage classics, restored rarities, and sneak premieres complete with celebrity encounters. And, even better, we are joined once again by awesome guest-star Meghan Murphy of Kawaii Not and Geek Merit Badges fame!

If you would like to drink along, well… we weren’t drinking for this one. We were running on pure, unbridled sleep deprivation. Choose a drink that will make you giddy and sleepy at the same time, and you’ll be there with us.